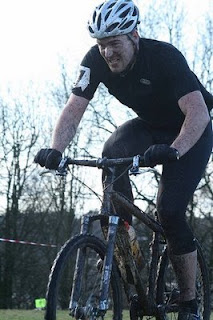 Most races these days take meticulous planning and organisation... they usually involve a few hours drive and having to carry everything you may need just in case so when a race drops onto your doorstep even if it isn't your prefered distance then it would be foolish to turn down the chance to put a number on and stretch the legs..

The Hit the North race was a 2 hour affair... set on a short 3 mile course at a venue north of manchester just off the M60 motorway... so roughly translating to 20 minutes drive from my house. The event was open to any type of bike with a good split on the day between cross bikes and mountain bikes.

I decided after racing at the same venue last summer that i would do it singlespeed again... the week prior to the race i got the Genesis IO to Manchester Trev to get the xt brakes and fancy light wheels fitted.. including 1.5" continental tyres.. he did a great job and i picked the bike up friday night and gave it a shake down ride up and down the street for 20 minutes to make sure everything was where it should be.

Saturday morning got to the race venue a good hour before the start.. met Charlie ( Wigfall) and James ( Tottle) there... got changed and rode a section of the course.. sheet ice everywhere.. was definately gonna be interesting.

After rider briefing a friend from work, Richrd O'Brien, turned up armed with digital SLR to try and capture some worthy shots for the blog... great as it saves the trawling though other peoples shots and subsequent negotiation to use them. 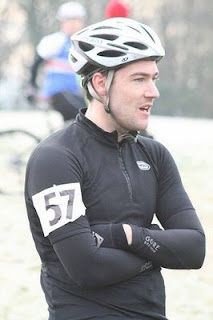 The start bottlenecked very quickly even though a little extra was added to try and spread the field so a fast start and getting to the front was needed... luckily my starts have improved.. i used to be nervous about getting to the front and always used to let everything happen around me then have to battle through the crowds now i have no problem in asking if i can shuffle into any available space to get to as close to the front as possible..

From the start as predicted the cross bikes took off... i managed to get myself into 4th place away from the crowds.. the course was a great hybrid of cyclo cross and mountain bike with steep drops to ride down and long sets of steep steps to shoulder the bike and run up.. 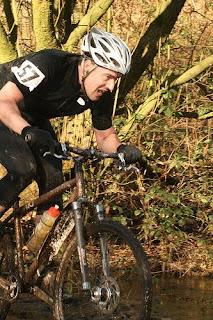 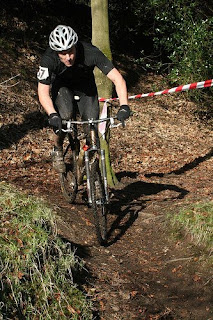 The weather started to warm after about the second lap and the mud got stickier meaning that on the draggy climbs i was reduced to getting off and briskly walking as i couldn't get on top of the gear and get alot of traction... the steep drops were great as even though the bike is rigid on skinny tyres the mud gave enough to mean i wasn't getting a total kicking on them... the bottom section of the course was flat out and the gear was spun out on the singlespeed until the last climb which was great as when everyone shifted into an easier gear there was plenty of traction to muscle the IO up it and make some ground up. 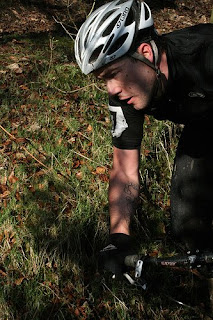 I was unsure how many laps i would complete in the 2 hours but after 3 ws told it was just under an hour to go so it looked as though 6 would be done... i metered my effort to this although i was flagging a little with having to push so much and then spin out to try and make it up... in my relaxed preparation i had forgotten to stick a gel in my pocket and by the 5th lap i was could have done with one then without prompting the guy i had been yo yo'ing with for 6th place said he had a spare gel and did i want it!! Without a doubt... got that into me and started to perk up although we were a third of the way round the 6th and final lap..

The last third of the lap all went wrong for me.. i had been racing closely another guy who would catch me on the downs and hold his ground on the flat but i consistently passed him and made serious ground on the final climb... this time though i got caught up behind a back marker in the muddt slow top section through the trees meaning he went into the downhill first opening a lead. when we got to the en of the flat bottom section i could see a group of ridrs ahead.. including Charlie who i was about to lap... as i approached a back marker i gave a rather generous amount of room and dropped into what looked like a muddy rut.. in fact it was a very icy hard as concrete rut so soon as i turned to get out it held its own an turned my front wheel from underneath me levering me squarely onto my hands and forarms ointo a very hard unforgiving fireroad.. i picked myself up first concern being alot of pain in my knee and knowing the ony thing to do was to get back on and turn the pedals in an effort to stave off the inevitable swelling and stiffness... i got to the top of the climb and though the opening in the trees onto the start finish field managing to cross the finish line 7th... with only the salvageable victory being i was the first singlespeed rider...

After a quick visit to get the deep cut on my knee cleaned all was left was to clean down the bike, pack up and have a coffee and chocolate bar with Charlie.

Although i wasn't entirely happy with the final result it was a great race and as the previous one very well organised with a superb course.. all that is left now is for my body to get in gear and start replacing the skin i left on course.

Pictures courtesy of Richard O'Brien (http://www.flickr.com/photos/r_j_obrien)
Posted by paul.e at 16:42 No comments:

This week has been the first week of base... the hours have gone up and so has the intensity..

This would of been a hard enough week but long hours at work and a few early starts upped the intensity.. Grace was on a training course so wednesday morning i got up and out of bed at 4.30 to see her off... that night was spent out on the singlespeed searching the streets of manchester with a local riding friend in search of the perfect hill to rep... anyway this recon ride came under the prescribed 'hilly 1.5hr ride' so that got ticked off the weekly training plan.

Only problem with the hill that was the bet was that at the bottom was a roundabout and junction of the M60 motorway.. only way to get the reps in safely and consistently was another early start so 4.30 am thursday morning i was up and out of bed again changed and out doing my hill reps.. soemthing deeply satisfying about getting up and out while the world is still aspleep.
Thursday night i did a gym session to leave a clear friday night for me and Grace.

Saturday was a long slow road ride... at the moment i don't own a road bike so i train on my old singlespeed with skinny tyres... great for the odd off road excursion too when needed... i did the usual run out up the brickworks climb, long hill, goyt valley, then final big climb up to Cat and Fiddle pub..
The day was clear, no rain.. temperatures were nice for riding... wind was blowing hard though and i caught a head wind all the way out until the final climb upto Cat and Fiddle.. meaning wind on my back for descent.
Road was ice/water free so it was all out attack on the descent..a quick glance behind to check for cars then swinging out to make use of the whole roads width to get in and out the corners as quick as possible then tuck back down to squeeze the most speed out.
I had decided to ride with ipod on... not usually recommended while road riding but i am super cautious when on the roads and always ride still being able to hear what is going on around me... anyway i stuck ipod on shuffle and let it decide the soundtrack.. its didn't let me down.. some like a hard techno, some like thumping rock... for the Cat and Fddle descent my ipod chose Dean Martin!! definately had a good flow through the corners... Downhillers take note... Rat Pack is the future for a smoother run:)

saturday was rounded off by a shopping trip to town buying some discounted Vans half cab trainers, north face slippers and a travel guide for Kyrgyzstan:) then going to see Keane at MEN arena... great weekend so far.
Posted by paul.e at 15:18 3 comments: