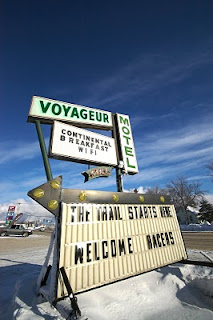 I'm here... International Falls, Minnesota.... and its living up to its title of 'Icebox of the Nation'.

The flight was overly long and jet lag has been hampering my eating and sleeping although i am trying to eat my way to victory with plenty of American food being consumed at race speed.

The weather is pretty good... blue skies and sunny but the temperatures are low, during the day its cold but when the sun goes in its something else... coldest place i have ever been and the air is so dry.

I've been packed and ready for a day now so am itching to start... just been out on the bike and sampled some of the trail, its pretty well packed and running very fast even for my 'skinny' little bike.


(Luckiy Jenn Hopkins is here with me to take care of all the image gathering so all credit to Jenn for any image i will use blogging this trip)
Posted by paul.e at 19:47 2 comments:

The bags have been packed on the spare bed for a week now.. the bike slipped into its comfy case and was tucked in tight on Monday.

My training hours were massive last week and now we have tapered to nothing... maybe a few light spins but now i'm eating and resting and aim to be a big ball of pent up cycling frustration when i hit the course at 7am on Monday... this maybe the wrong approach to what could be a long game but who knows.

I'm keen so lets see what lies in store for me.. this maybe my last blog till after the race unless i can get some web access at the motel.. the start can't come soon enough now.
Posted by paul.e at 14:36 7 comments:

Less than a month to go till I will be lining up with 135 miles of the bitterly cold Arrowhead Trail ahead of me, i have spent hour after hour trawling websites for any little bit of info that will help me make more educated gear choices but facts and figures mean nothing when the temperature drops and you are literally out in the cold.

With this in mind I have been taking any opportunity to test my gear choices... whether this be out on the bike with different sock combos or bagging up different foods and shoving them in the Freezer for the night to see what could be edible after a freeze.

The weather has played ball and delivered perfect training conditions with snow and cold weather but its always good to mix it up a little so with the guys heading out to the Ecrins in France for the ICE 2010 Ice climbing event it was a no brainer when an invite was thrown my way.

Meeting at Alpkit i was presented with my new sleeping system for Arrowhead, Jim gave me a bag he had picked up for me with easy top loading and waiting inside was a closed cell foam mat and a development -30 bag.. toasty:) 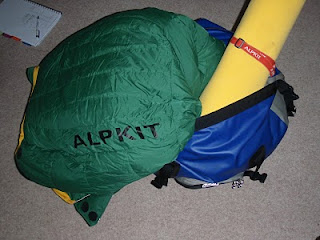 With all packed after some chopping and changing so everyone had the required maximum baggage allowance we were en route to Turin... arriving we picked up the cars and snow chains and headed for the Ecrins.

The accomodation was excellent and after some quick building of the bike we set off for the first ride of the trip.. as I had the only bike the others opted for hiring snow shoes.

We headed up the valley away from Vallouise towards a closed road that climbed up to Ailefroide, a small hamlet at 1500ish metres that is only inhabited during the summer. The first Km or so was pretty rideable... from then on it was a mix of rideable trail and some hike a biking.. especially when we veered off the main road and onto the path which took us over some avalanche debris and a sketchy log crossing... this ride was made more special as daylight failed and we went on in dusk.. 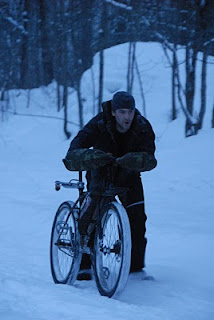 After struggling to keep up on the ascent the tables were turned for the descent as i sped down the bobsleigh like track snow shoe users had made down the centre of the track using a headtorch and riding into the snow the descent was good fun... i even enjoyed the snowy road back to our chalet.

Waking up the next day we were greeted by a new arrival... a fresh 40cm of lovely snow! 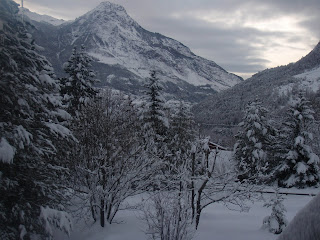 A drive down to Argentierre to mainly check out the event where Alpkit would be showing off the new Fig Four dry tools (sweet work Pete)and secondly to exact one of the many snow chain repairs that would have to be made during this trip.

With so much snow it would have been rude not to do some boarding/skiing that day... after all its still kit testing in the snow:)

The resort of Puy St Vincent although small was perfect... good powder and very quiet.. a good place to get back on a board after nearly 7 years.. this was good times for all, even James from Genesis who got involved even though he had never been on ski's ever and was flowing by the end of the session.

Taking the task in had the next day I had to get back out on the bike... this time joined by only 5 others as Pete and Dan took on the French in a dry tooling comp ( apparently they got taken to school by the locl climbers but had a blast all the same)... the others opted for ski's fitted with skins.

We headed for Ailefroide again to get some decent images and video... i rode the 10km to the start of the closed road... 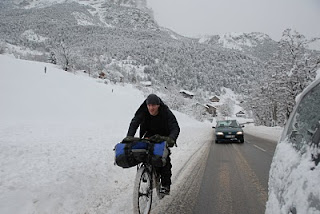 waiting for the others gave me time for a few shots.. 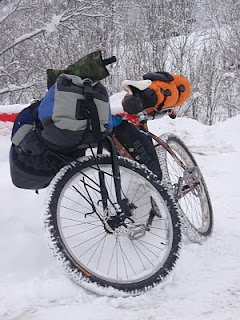 This time around after the fresh snowfall going was alot tougher... i broke trail for the first 600m before allowing the others to come past and help me out... 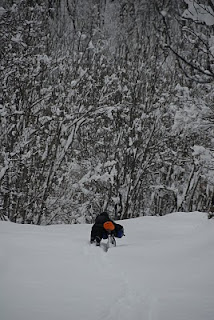 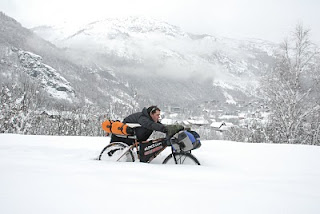 I was using the Montane Extreme Jacket and a set of Montane salopettes and was toasty warm... eventually though after a few km of pushing i was down to just a base layer... this is hands down one of the toughest things i've had to do... the snow varied from knee to waist depth and although the others broke a neat trail it was only big enough for my bike so i still had to wade snow.. 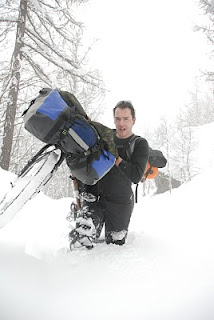 After a break for lunch at the top it was time to turn around and push all the way back to the bottom.. then ride the 10km back to the chalet:( 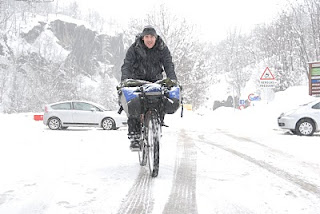 All that was left to do was head to ICE 2010 event drink some beers.. watch some insane dry tooling.. listen to some live music and bivvi out in the snow:)

Luckily i had my nice Alpkit bag but also a development Epic bivvi bag which was super spacious and the combo allowed a good nights sleep.. 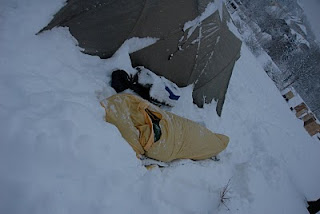 All in I am pretty happy with how this trip went... the Montane clothing worked really well... the Genesis bike is still comfortable and riding well in snow and the Alpkit sleeping system kept me dry and warm.. what else could I hope for.

Big Thanks as always to the guys at Alpkit for putting this trip together... i'm feeling pretty positive about a good course time at Arrowhead.. wonder what singlespeed course record is? :)
Posted by paul.e at 14:07 5 comments: