A few years back I rode the Whinlatter Challenge... I rode it singlespeed and fully rigid and I remember it being a pretty tough day on the bike... this time I turned up with suspension forks and gears and hoped it would be an easier day.

The event was as always well subscribed with well over 300 riders taking on the challenge of 2 laps totalling 30 miles .. lot of climbing and the reward being lots of switch backed descending that every good trail centre should have.

The start was crowded.. as always I assumed my crappy starting position well back off the front row, good chance to have a chat though and relax into the event.. I have such a varied calender of races and challenges this year and after a winter of cross racing I have eased up on the pressure of racing as there always is next week or next time if this one doesn't go your way.. with that attitude you don't waste energy worrying or placing yourself under undue pressure.. 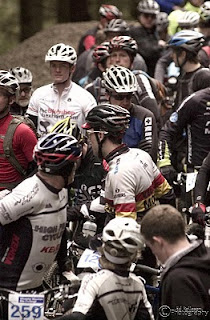 As the race started I got to work cutting my way up through the field.. a small comedy moment as I went well off line to do some overtaking but found myself on a mini pump track running parallel to the fireroad :( oops

The start climb brought back memories of Salzkammergut Trophy with an epic long climb to really try and thin the field which it did.. the pass wasn't flat out from the start and the climb did its work at restoring the natural order.

Fireroad climb flowed into switch backed singletrack climbing which gave into fireroad descending firing you into singletrack descending ... this was how it was for the whole course,, the climbs were plenty long enough to get into a rythmn but never steep enough I had to come out the 40t on the front.. years of singlespeeding have done their work in reducing my cadence to be able to push any gear :)

I was loving the course .. Loving the descending which is unnatural for me.. the Sanderson Breath was so much fun.. steel hardtails lap up this kind of flicky singletrack descending and I found myself looking for the lips to lift the bike off the floor or the slopes to nose wheelie down... probably not the most productive approach to racing but you gotta enjoy your riding.

After my nutritional error at Hit the North I put a few extra snacks in my pocket but 2 hours in found myself hungry and with nothing left to eat so I just settled in for a suffer till the end.. this is definately lesson learned and I will be stuffing my pockets with food from now on in.

I finished in 2 hours 43 minutes... 17th overall .. not the finest result and there is room for improvement but a good course, a good first race outing for the Sanderson and more lessons learned...

Thank you again to Ed Rollason for the images, great to meet you on Sunday Ed :)
Posted by paul.e at 21:50 No comments:

New start for Shoestring Racing in 2011 with the arrival of a new frame sponsor.

Toward the end of 2010 I left Genesis with the decision to get back to a more rounded approach to my riding and racing.

2010 was by far the best year in terms of diversity of riding to date.. I snow raced.. I raced at altitude.. I did multi day bike packing.. I did one day marathon events.. but I really felt little desire to apply myself properly to my training so although I enjoyed every moment there was always a wonder of what might have been if I had had the fitness of years previous.

Towards the end of 2010 I decided to do some race prep by just getting as many races under my belt as possible.. It was late in the mtb season so that left cross.. and I went for it .. soaking up every opportunity to race in the cold and the mud and it was immense!! I got some decent results.. I placed well overall and for 2011/2012 I will be trying my hand at a few nationals .

With this new found enthusiasm to race and a seeming glimmer of some ability to ride the shorter races I have structured 2011 to be more short events with a few longer ones rather than the other way around.. I will take in as many National XC races in the Master cat.. will see at least one road race a week once the season gets underway.. will ride at least 2 12 hour races.. might even take in a team 24.. and when there is a break in the racing I will travel to ride or bike pack.. Its going to be a busy year but its the building blocks for the next cross season and then 2012.

To race with this intensity lots of riding needs to be done.. lots of time on the bike equals lots of wear and tear and therefore without bankrupting myself ( I near managed that last year) a sponsor or a few is always useful.

I wanted to continue my use of smaller brands as to date this has served me well allowing more personal relationships to be developed and everyone happy at what they get from the deal... with this is mind I was excited to be informed by Jason Miles that he had seen Sanderson Cycles were trying to find a team to sponsor.. a few emails later and although I wasn't a team I guess they could see some value in what I could offer the brand so Steve at Sanderson sent me a few boxes to get me started..

Unfortunately my bike set up skills are lacking so luckily Billy at Edinburgh Cycles in Newcastle was able to build them up.. and a fine job he did..

Firstly the Breath, Japanese double butted Cro-mo, this is my geared race machine.. i'm still playing with the set up but the 40/29 front ring set up is perfect and allows me to ride 99% of trails in the big ring for that extra mental lift :) Bars will be swapped out for flat bars and tyres will be Schwalbe. 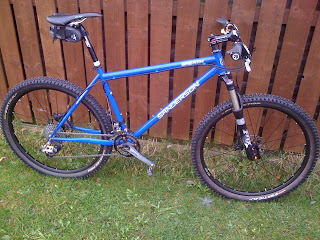 Next is the Singlespeed Soloist.. I will never be without at least one singlespeed in the garage.. Once you have ridden one then the simplicity is something difficult to give up.. the same Cro-mo as the Breath the Soloist has a nice eccentric BB design which is adjusted with some nice looking gold lockrings.. Ritchey Dropouts as per the Breath are also a nice touch.. 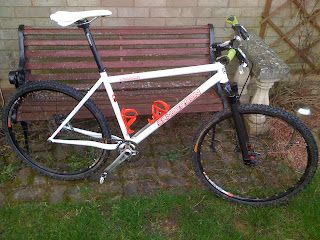 Now I have a bike for every occasion and already a boat load of race entries in.

Having spent last week in Fort William the Breath got a baptism of fire but straight away handled well and inspired so much confidence.. 2 weeks to Whinlatter Challenge and its first race outing :)

Next on the to do list is to finish a website which will hopefully expand on the ramblings of the blog allowing some third party input from riders I have alot of respect for and also news from the people kind enough to support my racing and riding.
Posted by paul.e at 16:52 2 comments:

I am pretty sure that spring is here... thats 3 rides now within the past week i've had to take gloves off and ride bare hands as my hands were too warm.. taking that as a sign that we are on the path to better weather, lighter nights and epic rides..