When the opportunity arises ... ride it !

The bicycle for some is simply a form of transporting yourself from point A to point B but for the me its the reason too travel.

The formula I work to is very simple ... Find an event or a spot you want to travel too ... Contact as many local people as you can find .. Ride and sample someone else's local spot.

The cycle (no pun intended) is self perpetuating as the more you travel and the more people you meet the further your horizons are expanded.  Chat to a new rider for 10 minutes and already you have another big stack of possibilities laid out in front of you.  I believe as I travel through life that owning and riding a bicycle has opened up so much possibility and experience I would of otherwise never have had.

With my simple outlook to take hold of any opportunity to travel it was not a hard decision to travel with Grace to a conference in San Francisco.. While Grace furthered her knowledge in her academic field I would expand my knowledge in my chosen field.. path, forest, road etc.  With the destination set all I needed to find were the local riders and local spots to ride.

The event of extensive social media sites has made finding people to ride with easy.  Forget the seven degrees of separation theory as cycling is a much tighter knit community and you will no doubt know someone through only one or two friends.  In this case my nearest port of call was Errin Vasquez in LA, sure enough Errin was quick fire to come back with 2 guys I could contact ... Erik Mathy and Andrew Gentry Law ... and as an added bonus Errin could make a trip to ride too.  A plan was coming together.

On arriving in San Francisco the first point of business was to get hold of a bike and luckily Erik had a Salsa Vaya I could use, only a size too big but it would be fine.  The first taste of riding in SF was the West Bay area.  Kindly picked up by Andrew we made out way over to meet Erik and Errin at Erik's place in Almaeda.  From there the plan was simple .. roll some local tracks and streets and whenever the mood took us stop for coffee, beer, pizza etc.

Straight away the mutual love of 2 wheels and riding eased the conversation along as rides past and present were discussed, coffee was drunk and local small stores were visited.  Later that day we met with Lucas Winzenburg of Bunyan Velo fame and Gabe Ehlert, a local rando rider and talented designer of the Box Dog Bikes Pelican frameset.  A plan for the following days ride was established.

Mondays ride started at the Ferry Building, Erik, Errin and myself were joined by Gabe and his friend Jake for a trip out to Mt Tam.

The ride started steadily tracking along the bay toward and eventually crossing the Golden Gate Bridge, again another cool moment afforded by cycling.

Mt Tam lays beyond the Marin headlands and as we rolled through the local towns I wondered when the climb was going to start.  Every little town seemed to have provided the inspiration for a Marin Bike name so I tried to remember what each model looked like as a mental challenge.  It wasn't long before we rode through a tree lined road to the start of the Railway Grade trail that would take us to the summit of MT Tam, both east and west summits ! 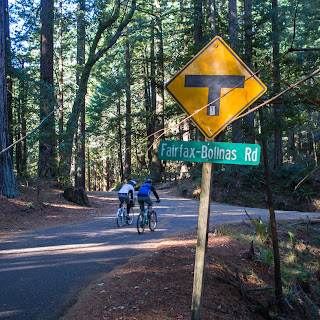 The climb was a dirt road that never really had a huge gradient due to its previous use as a rail track for tourists to climb the mountain, but what the climb may of lacked in gradient it made up for in duration.

We climbed in the sun on dry trails and it really was perfection on a bike.  After a mile or so of climbing we stopped at the first view point, we sat for a few minutes and soaked up the view looking back toward San Francisco and scoured the hillside picking out the great network of trails that exist here. 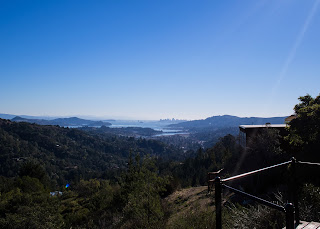 From our first viewpoint we looked up and could just see the trail we were heading for and the forest service lookout point which was the first summit we would aim for, there was still a lot of climbing to go.

As ever the gradient was always steady, the sun was shining and the view and trail was superb at all times.  Gabe took up the front of the group and steadily we made our way up even opting for the steeper tarmac section to finish the east peak. 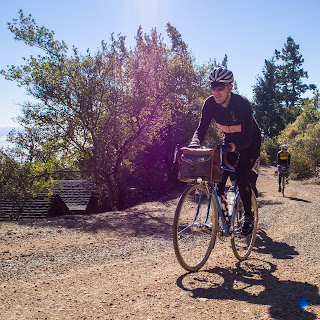 There was a a variety of bikes within the group ... a definite lean toward the rando steel set up with the vaya filling the gap between them and Erik's loaner steel singlespeed mountain bike :)

After the east peak there was still more to come with a short descent then the climb up the west peak .. after that though the descending started and it was as long as the climb !!

Swooping turns were coming fast as I tried to keep Gabe in sight, I watched his rear light glow brighter as we dipped into more dense wooded areas the further down the descent we got, always mindful of the drop in temperature and the potential for patches of ice.  Gabe quickly rode away effortlessly leaving us all to regroup at the base of the descent on a dam. 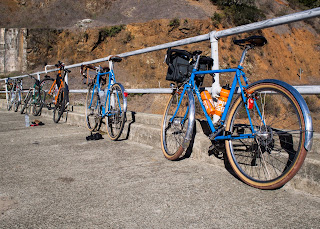 Discovering that at the base of the dam out of the reach of any sunlight a small pond was frozen so like a bunch of kids we spent a while throwing rocks down to listen to the crazy reverberation of rock striking ice.

All that laid before us now was another much smaller climb and a descent to lunch .. a German sausage joint with an entire wall dedicated to bike racks .. bike friendly ? very much so !

Stomachs full we rolled the last few miles to the ferry terminal and travelled back to San Francisco boat assisted. 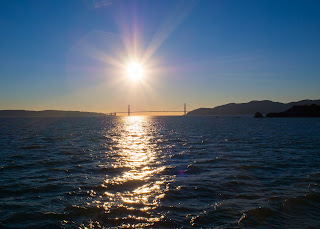 Time for a final coffee stop was made then a roll back to the hotel ever mindful of the traffic and differing rules of the road :)

A great day out with great people and one that will stay with me for a while.

I was lucky enough to manage a few local city rides after that and also a day out just me and Gabe where we travelled south and took in the beautiful coastline not to mention another epic forest and dirt road climb this time with more serious gradient and an even windier descent.

San Francisco really offered me so much potential to ride as with little effort you can be beyond the city and in to some fantastic scenery .. something I am used to in the UK but trails and rides on a US scale are fairly impressive.  New friends were made and more riding memories were stored to be reflected upon at a time when I cannot ride anymore ... such a fantastic place and fantastic people.

I guess my biggest memory from the week was non bike related when I finally got the right place and the right time at Yosemite to ask Grace to marry me and she said yes !  A whole new chapter of life started from that point on with more planning, organising and travel to be organised .. but that's what we both love.

Thanks Errin for the use of your images, Thanks Gabe for some good routes and excellent company,  you taught me a lot about raccoons and a huge thanks to my new friend Erik Mathy for the loan of your bike and a few great nights out !!
Posted by paul.e at 13:23 No comments: