When people ask me about my Salsa Warbird I generally tend to tell them its a cyclocross bike .. its easier .. how do you explain about gravel racing when you live in a country that doesn’t have any.  The reality though is that its not just a gravel racing bike as its merits lend themselves to so many surfaces.

When a group of friends decided that riding one of the road spring classic sportives in Belgium would be a great way for a break and that the classic decided on was the Ronde van Vlaanderen (Tour of Flanders) there was no doubt that I would be riding the Warbird .. firstly as so close to Trans Iowa every mile I could ride on it would help my cause but secondly as the course is littered with many sections of cobbles covering climbs, descents and the flat.

The RVV starts in Bruges taking a fairly flat and fast route to the outskirts of Oudenaarde where at this point the fun starts ... the route circuits the city taking in as many cobbled ‘bergs’ as possible ... short sharp climbs some seeing gradients of 22% and mostly cobbled.
Our ride preperation was not ideal .. our hostel room the night prior situated above a bar with a DJ on till 4am with what seemed like most of Bruges taking advantage of the loud music and strong beers ... music variety was good it just would of been better without the prospect of 260km to ride the next day on what ended up being 2 hours sleep.

7.30am we rolled down to the main square in Bruges ... the weather was cold hovering just above 1 degree celcius ... like most sportive style rides the start is between certain times so no mass start ... we pedalled through the start and began our spring classic experience.
The pace was initially brisk hovering around 18mph as we bounced from group to group up the road catching the riders that started earlier ... we would just settle into a group that felt like about the right speed then we would arrive at a feed station ... out the feed station the pace would be up again as we again looked for the group that fit us the best.

As we hit the outskirts of Oudenaarde a quick look at the computer showed the first 80 miles had been an average of 17.5 mph ... a reflection of this flatter section of the course.
The second half of the course was far more ‘interesting’ as we started to tick off the climbs.
At the foot of every climb there was a sign board telling you the name of the climb, how long it is, the average and maximum gradient... 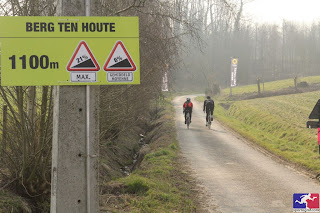 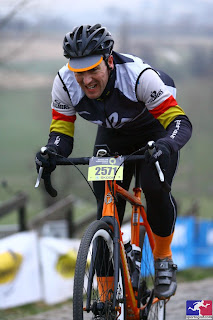 The first berg of note was the Koppenberg ... if you know of the spring classics then you know the Koppenberg .. I have riden this climb twice before so I knew it was a leg stretcher ... as we approached the climb it came just after a left hand bend and just before the bend you could see the gradient and the cobbles of the climb .. 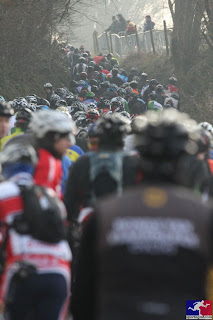 on this occasion unlike the previous climbs up it I got rode into by another struggling rider ruining my 100% record early on in the day ... a quick few steps and a cyclocross remount saw me ride to the top. 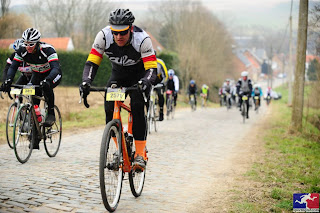 This then set the precendent for the rest of this ride ... the bergs and cobbled sections then came thick and fast ... disc brakes and 38c tyres were a god send as my progress seemed alot less laboursome than those on skinny tyres and superlight carbon bikes.
I managed to tick off near all the steep climbs using the 46 ring until almost the last which I knew would not be possible ... coming at around 135 miles in you hit the Paterberg .. a max gradient of 20% which comes in the last half of the climb... at only 350m ish long its short and sharp and I was glad of the 36 inner option on this one. 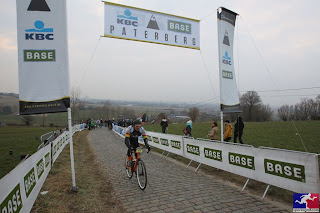 The final 15km or so again became relatively flat as we strung back out into a paceline riders dreaming of being Boonen or Cancellara riding toward a career defining win J
158 miles had been covered to the finish.

The ride had started and finished cold .. at one point touching minus temperatures but importantly had stayed dry ... the hard work of the first 80 miles had really been worthwhile getting to experience the later part of the course .. many waffles were eaten and that evening strong beers drunk.

Was this good training for Trans Iowa .. who knows but it certainly was another great day on the bike and the take home message was certainly that a Warbird is not just for gravel .. its for road, dirt, cobbles, etc J
Posted by paul.e at 10:05 No comments: