As I was already in the Lakes for the Montane talk at the Ambleside Mountain Festival I thought it worth my while making a weekend of it and racing the GMBC as Ayup Lights were sponsoring the event and Ryan was there with the motorhome and we have ridden not nearly enough.

The race is 2 laps of a 16 miles ish lap.. taking in a little of the North Face trail but mainly visiting alot of the great natural trails in Grizedale Forest.

The weather was less than perfect... in fact it was up there with the worst i've ever raced in.. most lining up at the start in full wet weather gear..

The pre race prep didnt go to plan with having to fix a puncture that had surfaced from the previous weeks riding... made worse by the unbelievably tight Stans rims I eventually had to admit defeat and borrow a wheel from Ryans Fiancee Marnie's cross bike.. thanks Marnie :).

The start line saw me on the front line... thats as close to the front as I would get for the rest of the race.. as we set up the paced wasn't crazy but i soon found that my lack of training shone through and I resigned to letting the first 5 guys go up the road.. Ryan included. 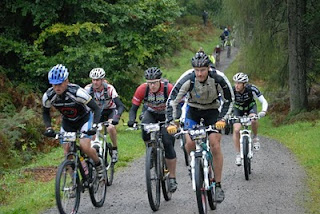 I soon settled into a good riding rythmn and seemed to be locked into battle with the same few riders who would pass me on the descents as I struggled to hold pace on my rigid bike amongst the rocky singletrack but then as we got into the climbs I would catch and re pass them.

The course was holding up to the number of riders and continuing downpour.. weather was ignored as once you are wet you are wet and it wasn't cold. 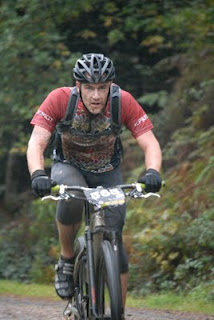 As is struggled on my lack of recent training and poor race prep was shining through.. I lost a few places due to poor descending.. I lost more due to poor pre race nutrition and vastly underestimating the time this race would take.

I only took 2 gels and as the first lap took 1.40hr I knew I should have had more food.. and as soon as you know you didn't bring enough the body wants more.

The course was such a good mix of riding.. I felt good on the fire road climbs and really enjoyed the typical Lakes rocky tech singletrack descents with some narrow escapes as enthusiasm overtook skill.. luckily or not the worst incident of the day was taking a huge branch and pine needles to the face that the guy in front had unleashed from its full extent cutting my nose and scratching my eyeball :( 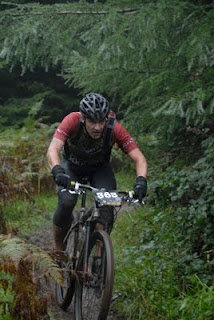 By the time I had reached the mid point of the second and final lap I was actually feeling pretty hungry... the worst possible thing mid race so I had to concede to damage limitation and just get myself to the finish.

The race was excellent.. I managed to scrape a pretty awful 19th place but I enjoyed being in a race again.. Ryan who was within sight of catching the leader and riding well within himself had to pull out as his brake pads were totally shot.. unfortunate as his bike continues to stop him showing what he is really capable of.

I took away more valuable lessons as always.. I need to prep better, I need to actually start proper training, I need to try this suspension fork lark and see if it makes a difference to my riding ..

Decided that in my current form driving to Dusk till Dawn is a waste of my resources so I'm gonna settle back into training and start doing some winter epic trips :)

Pictures used were courtesy of Sportsunday.co.uk , Thanks for the support.
Posted by paul.e at 22:05 3 comments:

Ambleside Mountain Festival was a new event.. with a range of organised activities and speakers from different outdoor arenas this first year event looks set to be a year on year feature.

With Montane clothing backing this event there was again the opportunity for me to get involved with a little presentation and questiona and answer session.

As I managed to get off stage alive at the Keswick Mountain Festival I wasn't overly concerned... a smaller audience and some initial technical hitchs made for a more relaxed atmosphere and I enjoyed the time under the spotlight again answering more good questions but also getting to watch the presentation slideshow Col at Alpkit made for me has got me fired for more adventure.

Other speakers were Ian Almond talking on his 3 month climbing trip to Patagonia which had some great photos and Marc Laithwaite an endurance runner and second place at this years Lakeland 100.

Hopefully I will get asked to do more of these style of events .. hoping that I can get more trips under my belt to have something else to talk about :)
Posted by paul.e at 21:53 No comments: