With a spare weekend i had to fill it with a road trip... Isle of Skye has been given some amazing reviews so why not..

The plan was simple.. leave midnight Thursday.. get there for about 8am to give me full day to ride and look around.. then ride saturday and come home sunday... i was open minded as to the riding i would find there i was just more concerned about getting some map reading practice in and also trying to get some good pics.

The drive up was pretty straightforward.. nothing much to see.. as it was dark.. did stop for a call of nature on a quiet scottish minor road.. then flashbacks to films such as Dog Soldiers and Jeepers Creepers came to mind so i finished quick time and hit the road... vivid imagination.

As dawn broke i could see the amazing countryside that i had been driving in for hours.. mountains either side.. i as high up on the road looking down to a loch.. everything capped in snow.. this was what i came for.

This looked like a straightforward loop... head along road from start... then down one valley and back up another.
The weather was pretty crappy so i wrapped up in all layers and headed off... the first road climb came quickly after only a few miles and i challenged myself to staying seated in the climb and pushing through the gears... ouch.

The turn for the first off road section i couldn't see so looped a little more road.. when the off road started it was fairly heavy going, very boggy and difficult to get a good line.. the track skirted a few lochs with occasional foot wetting crossing... a great sight for so early on in ride was a herd of deer just the other side of the loch.. great to see animals of this size in the wild.. makes me happy.

By the time i got to the road at the other end of the valley i was a little dissapointed with the riding so far as i sheltered out of the rain under a bridge for brunch.. 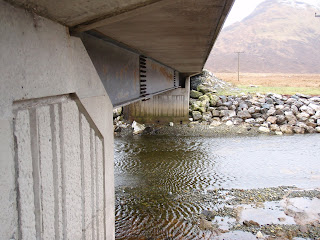 After irish soda bread with chocolate spread and some jaffa cakes i set off another road climb round the headland.. with warmer legs this one was easier and topped out with a fantastic view..

This headland marked the turn for home up an adjacent valley... i wasn't holding out much hope as the trail wound its way rockily upto a clearing then gave me one of the best views of perfection i have ever seen.. this is what i came to Skye to see.. 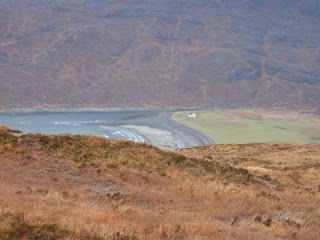 This place is so rugged and add the element of bad weather and the total lack of people.. i didn't see another person on any trail i rode.. the trail descended to the beach along a winding rocky trail with occasional breaks to jump but then come back on the brakes hard to make the next turn.. this was the riding i was expecting and really turned my day around... 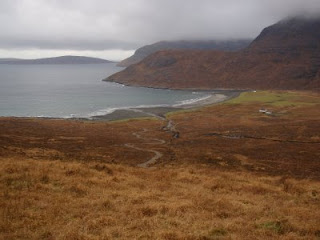 The trail from the bottom of this descent wound its way back up the valley with nearly 7 miles of continuous tech singletrack.. with little sleep the concentration to ride this totally burned me out.. what fun though.. you would hammer through a less tech section then slow down to pick your way hopping through a rocky outcrop.. 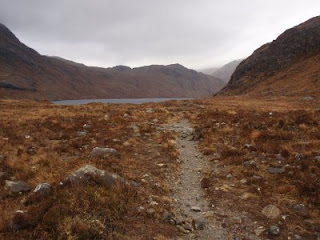 then there was the raging fords to cross as they were fueled by many waterfalls pouring from the rock faces to both sides of the valley.. Skye had alot of water to get rid of that day and it felt like it wanted to do it quickly...

By the time i got back to the car i was beat.

Took a drive upto Portree to take a look about then to Portnalong to Skyewalkers hostel where i had booked in for the night.. the hostel was great.. very clean and owner super helpful.
That night i drove back to Portree to hunt some hot food and settled on chinese.. then waited for race to text from Egypt as phone signal variable across Skye but here was good.
Back to Hostel.

Got up in morning and weather was super nasty... howling gale and pouring rain. Decided to get in todays ride and head south back home chasing better weather.

I had heard about the Quarang from a number of people and had kindly been given a suggested route by a forum user... the route was short and apparently a classic so it didn't bother me to head out riding in pretty serious weather.

As it happens the drive to this ride was amazing too.... apparently peugeot filmed an ad here where the sat nav directs a guy to the middle of nowhere then instructs him to 'enjoy' ... winding downhill country road with great visibilty allowed some fun to be had rolling through the bends.. fun had already started and bike was still in car.

I got ready super quick and headed out on the trail... it looked a thought it would be off road out then road back.. the going was mainly ride/push/hike as it got steep going up.. this place is crazy.. amazing geological features.. heaps of waterfalls piercing the rock faces and weather sweeping the valley.. 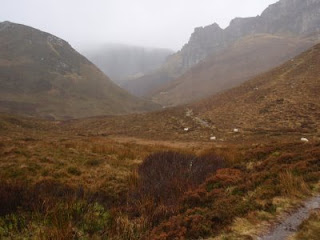 By the time i reached the highest point it was a section totally exposed and funneling the wind directly towards you... felt like being sandblasted... i couldn't look into it and had to squint and cover my face with gloves just to see where to go.. 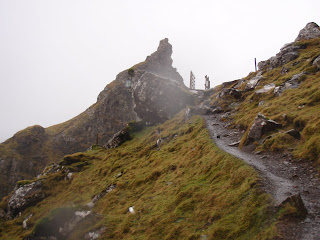 The trail skirted underneath this immense imposing cliff face towering above you.. the trail itself being very narrow with a nice drop as a prize for catching a pedal or slipping off a rock.. as if this wasn't bad enough there was 2 waterfall crossings thrown in for good measure.... time was taken here as i didn't fancy the wet rocky fall that would come from a rushed crossing..

All was going well with the road end in sight until i rounded a corner to find a gullie/waterfall ... it was vertically sided with water running over every surface... i could just about make out a few foot places but couldn't see how i could prop my bike up on the otherside .. i backtracked to see if i had missed a minor trail... nope this was it.. after a long good look and also checking out what would happen if i fell i decided the penalty for mistake was way too high and sometime when you ride on your own especially in a place like this were people don't frequent the trails you got to err on the side of caution.. no bad thing as i got to sample the trail in both directions.

As it turned out the water breaks that had annoyed me on the way up with constant hopping breaking the rythmn now became ramps to launch off:) what a great end to the ride..

What a great place, i'm pretty fired to come back here and just see what i can find..maybe bring the camping gear and enjoy some of the more secluded spots... highly recommended.

Couldn't blog this without posting the last pic i took before i left Skye... 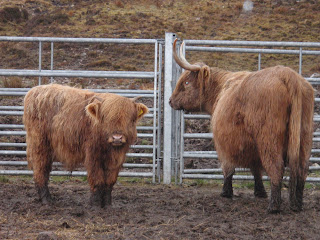 Well it makes me smile:)

very slack on my part but not as i have been lazy or had nothing to blog about.. the exact opposite.. i have been training and riding every minute spare.

With so much riding comes all the associated prep time... cleaning of kit, cleaning of bikes, fixing of bikes etc etc etc anyone that rides or does any similar activity knows that to get in a good 2 hour session usually entails an additional 4 hours of packing/unpacking.

So i am happy to be able to sit down and update.. Grace is away (back tomorrow though!!!!! can't wait).. so i am home alone and just back from a serious road trip.. that warrants its own post though.

Firstly Icebike... Madisons trade show... after dropping Grace off at airport and going for a swim i headed to Milton Keynes to go check ou the latest stuff from Madison and meet with my sponsors and especially the guy that looks after me, James Olsen, show did not dissapoint with plenty of great kit and an awesome Genesis 953 framed bike ( i want!).. after chatting to james and also Matt Rushton (marketing) i came away very happy at the direction this sponsorship is going and also getting some positive feedback on the plans i am laying down for next year.. i also came away with my new helmet... Bell Volt.. fit is reallly good and it looks good which is nice:)

While i was down that far south and with a riding spot in Woburn Sands close i organised to meet the West for a few hours riding.. we got together late in the afternoon and got some riding done on the trails there taking it into darkness to try out the Light and Motion lights i am using this year... SECA Ultra on the bars and a stella 200L on helmet. Output of the SECa is unbelievable.. quoted 890 lumens and i believe them!!

Also gave me a chance to take sneaky night pic of my IO ... i love this bike its so fast!!! 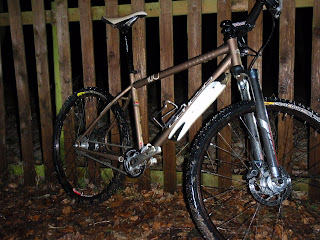 Then Catching up with an old riding friend that for one reason and another we haven't had a good hack in the peaks for far too long.. so the route was left upto Miles to decide and he came back with something i hadn't done..

The route is called Peak to Peak and stars at Peak Forest heads out through castleton and hope to Ladybower reservoir where a little loop then points you back towards the start. This is classic peaks fair... great long climbs and rocky descents.

The morning started with a catch up chat whilst Miles fueled up on weetabix.... as all good routes the start was a steady climb which earned enough credits to warrant a great downhill... Pindale.... i have never ridden this before but it was great.. the top section was rocky so it was a 'point and shoot' letting the forks do their work while the backend 'Pinballed' around hence renaming this descent 'pinball' ... the lower section smoother out and had a great flow allowing you to pop off any natural feature you could find.

This descent lands you at the bottom of the big climb for the day all the way from Hope to the crossroads where you have the choice of the super tech descent called the beast or the roman road.. which is slightly less technical and tough on the arms being so long and rocky you get a serious pump on..
We opted for the roman road descent with Miles still nursing an iffy colllarbone that was liable to break with even the smallest of falls... the switchback climb to hagg farm left another great descent to ladybower reservoir.. 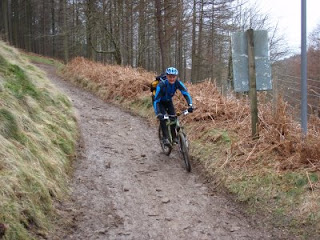 After the short loop we made our way back up the Beast to the same crossroads... the weather was fantastic... 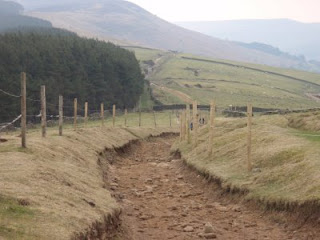 after a few wrong turns on the way back we ended up with a total of 29 miles.. not a bad days work.. good day out.. looking forward to a 3 day trip camping and riding that was planned as we rode should be good times.
Posted by paul.e at 13:38 2 comments: