With the cross season closing out I wanted to take full advantage of any remaining events left to race the cross bike before it gets hung up till probably September.. with this in mind I opted to do a back to back weekend of racing ... but not only double up on the racing but double up on the normal distance :)

Saturday would see Hit the North in Manchester.. Sunday the Super Enduro at Hetton Lyons.

Hit the North is a CX vs MTB 2 hour race organised by Jason Miles of JMC racing... the course was a mix of cross style riding but with mtb singletrack and technical descending thrown in... add a large field of riders (near 200) and you have yourself a fantastic event.

My Saturday started at 5:30am .. up for breakfast then out the door by 6am for the 2.5 hour drive to Manchester from Newcastle.. Ipod full of tunes in the car and some energy drink and life was good.

The weather started in the North East as wet and miserable but gradually got better as I headed West.. by the time I got to the race venue the conditions were mild and the sun was trying to come out... after signing on and catching up with friends I got changed and did a lap of the course... there were some fast flowing singletrack sections, rock gardens, hellish bike carries and even a stream crossing to contend with.. dull this course wasn't and it kept you on your toes the whole time.

At the startline I assumed my usually rubbish position of 4 or 5 rows back .. we started up a tarmac climb .. I picked off as many places as possible before the inevitable bottle neck and then the procession through the first singletrack... out onto the wider trail I was out the saddle sprinting to make up some lost ground before a dismount and carry up some steps.

My first off of the race came quickly heading down the 'chute' of mud.. as it kicked into a steeper drop I wiped out the front end and into the dirt.. straight back up into a climb. Into the fast flowing singletrack it wasn't long before I came across Rich Rothwell with a mechanical and not longer after that Ian Leitch with a nasty looking broken seatpost :(

As the first lap ended the order had been sorted seeing me back in the back half of the top 10 ... a few people around me constantly exchanging places.. the mountain bikers would drop me on the descents then I would take ground back on the flat and the climbs.. I was so focussed on the constant exchange of places we were 80 minutes into the race before I had taken any food or a great deal of water :( 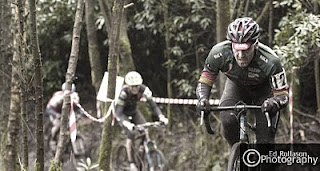 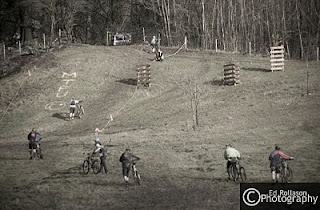 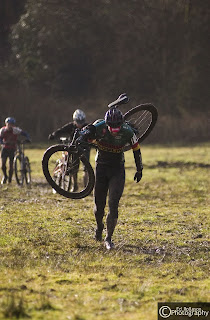 By 90 minutes I was fading.. I had a gel and before it could kick in I dropped a few more places just clinging onto the top 10... the gel kicked in and it was 'Go' time... I retook 3 places and approaching another racer my high of the gel turned into a low and it was back into limp mode. 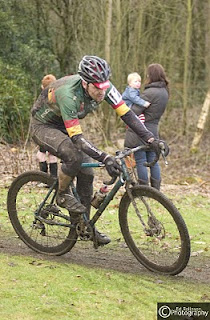 By the start of the 6th lap I was fading.. luckily the nearest racer to me was also and an agreement was made that if I didn't turn the last lap into a head kicking competition he would concede the place... sensing no further need for survival my body really gave in and I struggled round the last night driven by the thought of finishline snacks. 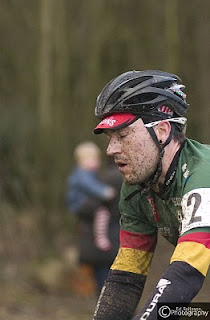 I think I could have finished nearer the top 5 but I learn't the lesson of nutrition the hard way after a fair few months of 50 minute races needing no food or water.

Sunday was an easier start to the day with the event being local and already having driven 300 plus miles to Manchester and back the previous day.

The Super Enduro is a cross race to see out the end of the local TLI cross races.. a one off non league event there was no pressure.. the legs definately felt jaded after the combo of the previous days racing and driving so expectations were low.

Unfortunately the field of riders was low with the extra distance to be covered and the rubbish wet weather only bringing out 20 riders or so to start the race.

The race started down a stretch of tarmac into the wind and it wasn't long before I realised that my position at the front of the field was one of a windbreak for everyone else so I eased up and rolled onto the first dirt of the course.. Unlike Hit the North this was more a true CX cross.. no need to dismount and nothing too technical.. a horrible long drag to the top of the course being the worst section and a dicey straight muddy descent into a sharp left hander being the highest risk manouevre of the course.

Very early on in the first lap I had to watch Steven Ward ride comfortably away into the lead... I then similarly had to watch 2nd and 3rd spot leave me fighting for 4th.. there was no snap in my legs so I had to look to play the longer game.. I was caught up with 2 other riders in the battle for 4th.. every chance I got I put in a little dig just to test the other guys.

As the hour mark passed I took on a gel and took the lead to our group of three riders.. on a sharp short climb I pulled out a few metres so decided it was a good time to get going if i could.. I pushed on the pedals a bit harder into a flat section then as I got out of the saddle for another short climb I felt my bars shift.. as I looked down my bars had bent.. I stopped and as i took hold of the bars they snapped :( disappointed that my race was over was being balanced by relief that they had gone on a climb and not a descent.. the race was over.. as it was Steven Ward won comfortably lapping the whole field!!

Thats the cross season done and dusted for good.. this week should see the arrival of my new sponsor mountain bike frame for 2011.. pictures as soon as it gets here :)

HTN pictures courtesy of Ed Rollason
Posted by paul.e at 19:07 No comments: