Holyland Bikepacking Challenge  is a self supported event.

The rules of self supporting are pretty clear in that while on the course you cannot receive any help that is not available to all ... so you couldn't have a support crew on the trail or have pre determined supplies of food and water ... it levels the playing field and makes the racing low budget and more accessible to all.

However, there is nothing to say that prior to the event and afterwards you can't be helped in the logistics of your travels and that is exactly the kind of support that Gordon Active by Gordon Tours have helped me with.

Established in 1972 these guys are one of Israel's largest tour operators and active in promoting cycling holidays in Israel.

Gordon Tours Ltd have been kind enough to offer advice on all aspects of my stay both before and after the event to ensure that all I have to worry about is packing the bike and turning pedals.

Huge thank you and will see you guys soon.

A process of constant refinement

.. thats how bike packing feels to me.

Every time I come back to bikepacking I do so usually after a sufficient gap that allows some new thought process to occur as to what I pack and how I pack it.

Obviously the nature of the trip to some degree focusses the equipment around a certain period of time or temperature but after that you can be as creative as you want.

This weekend I had my first real stab at a super lightweight set up .. I was brutal in culling as much as I could.  A friend once told me any idiot can be uncomfortable and I am prepared to be that idiot. 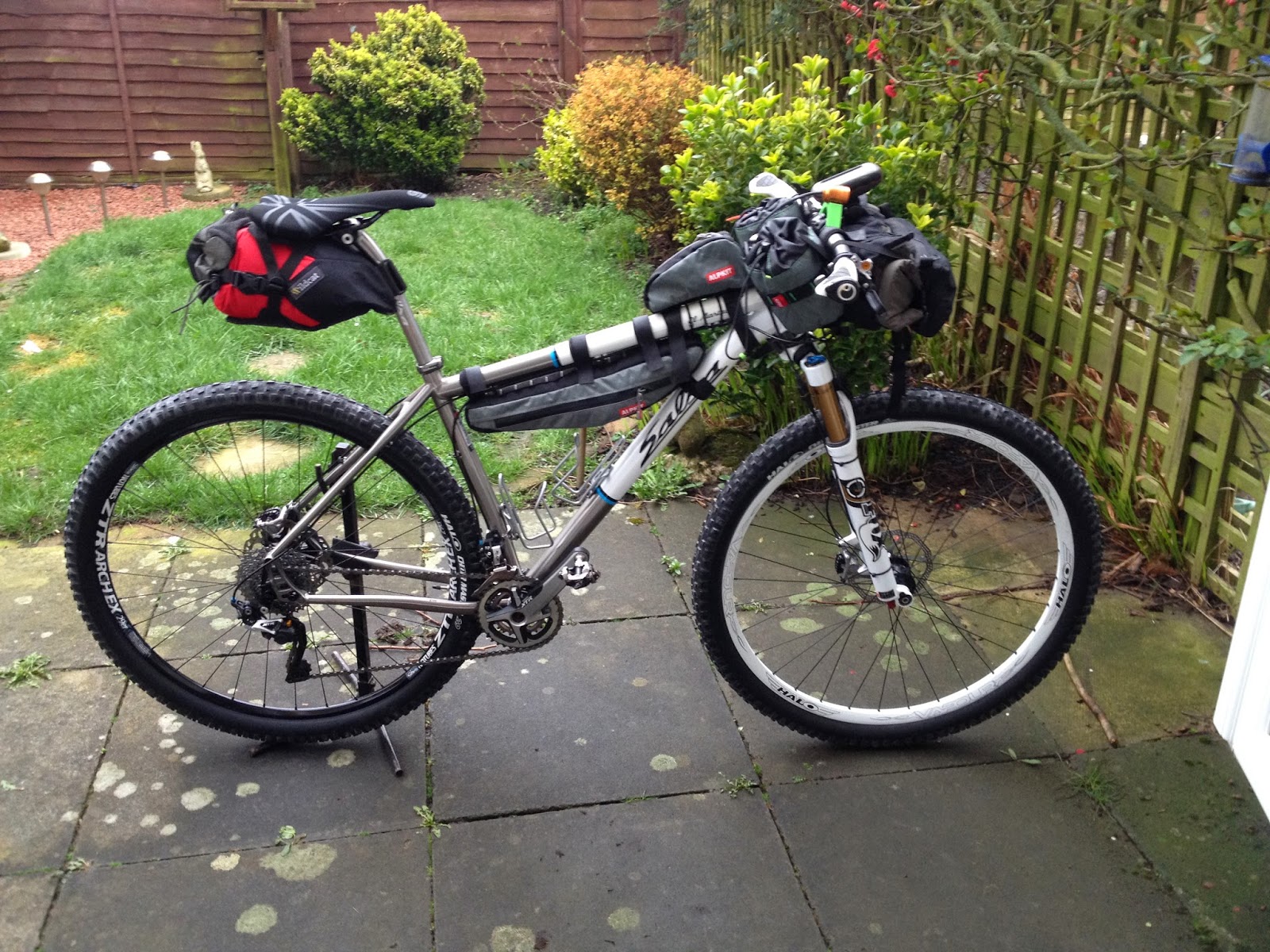 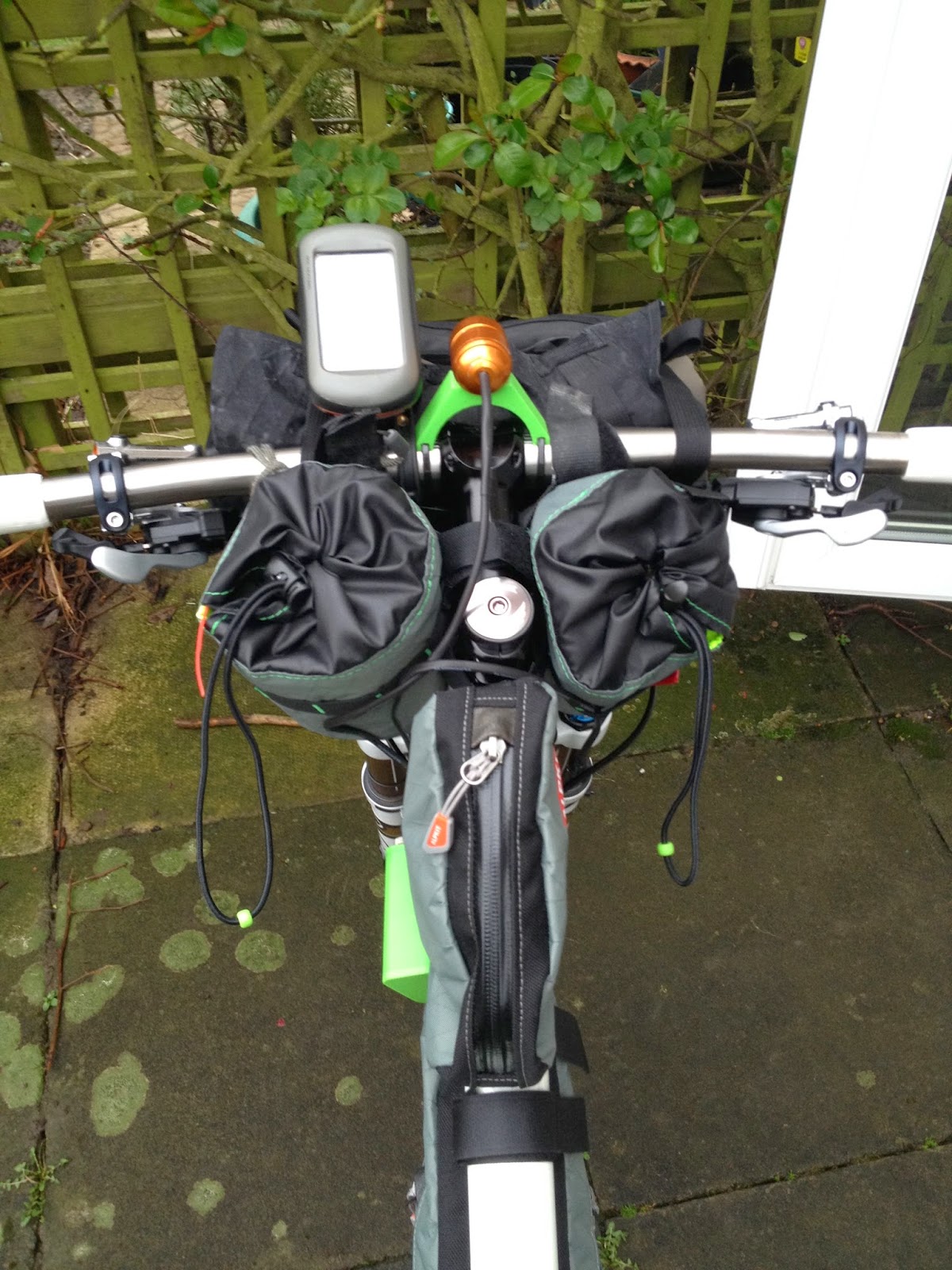 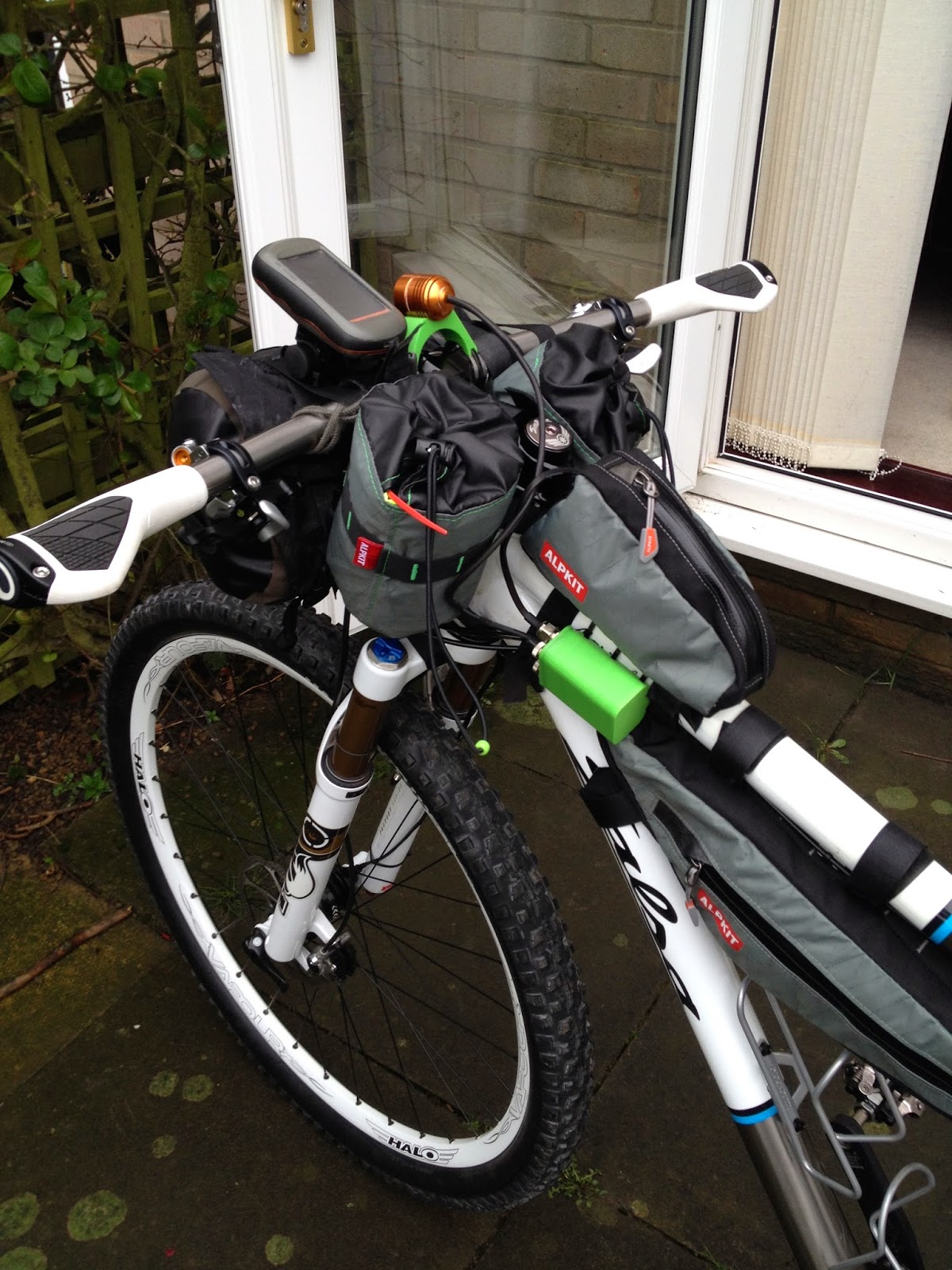 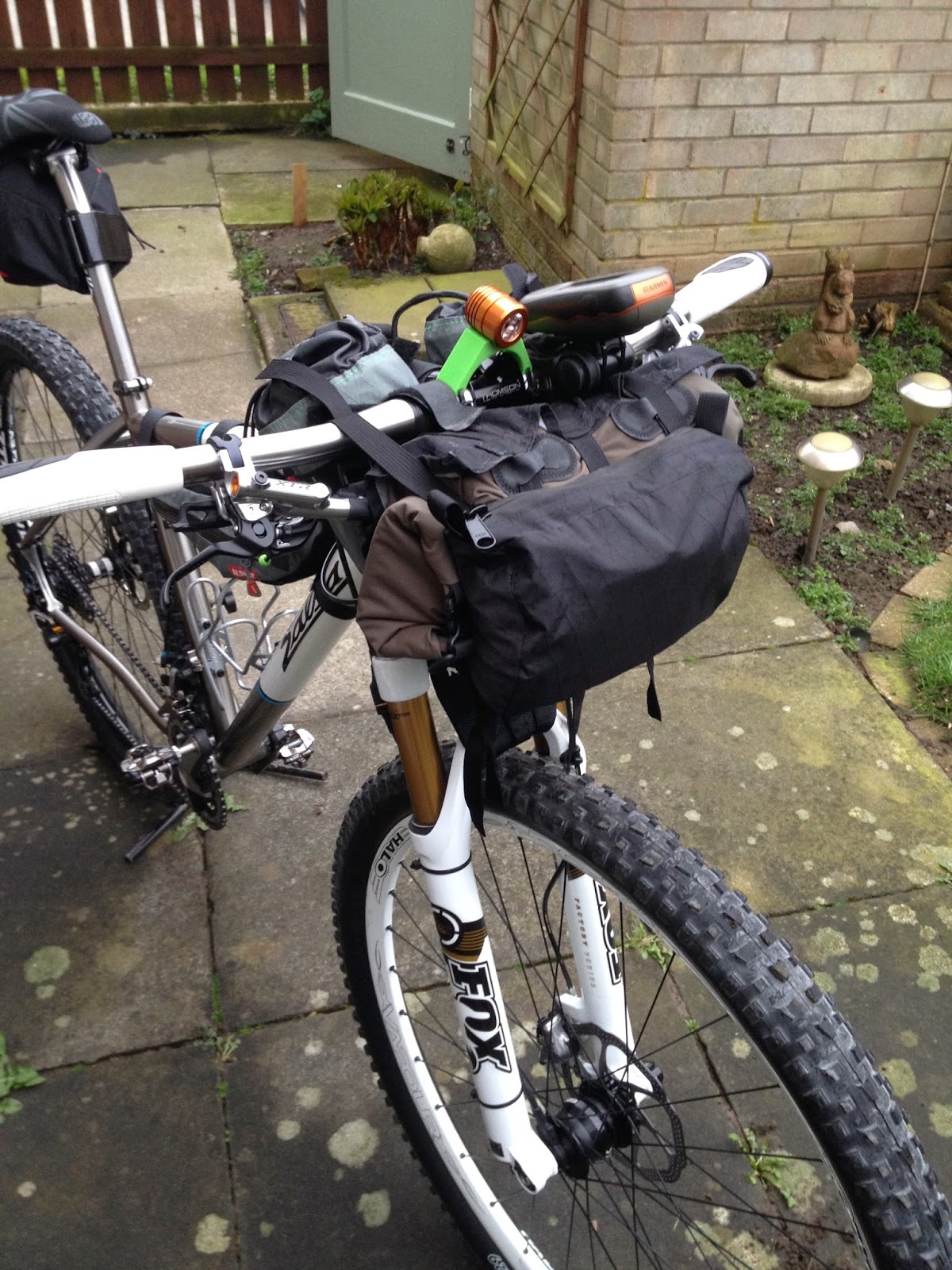 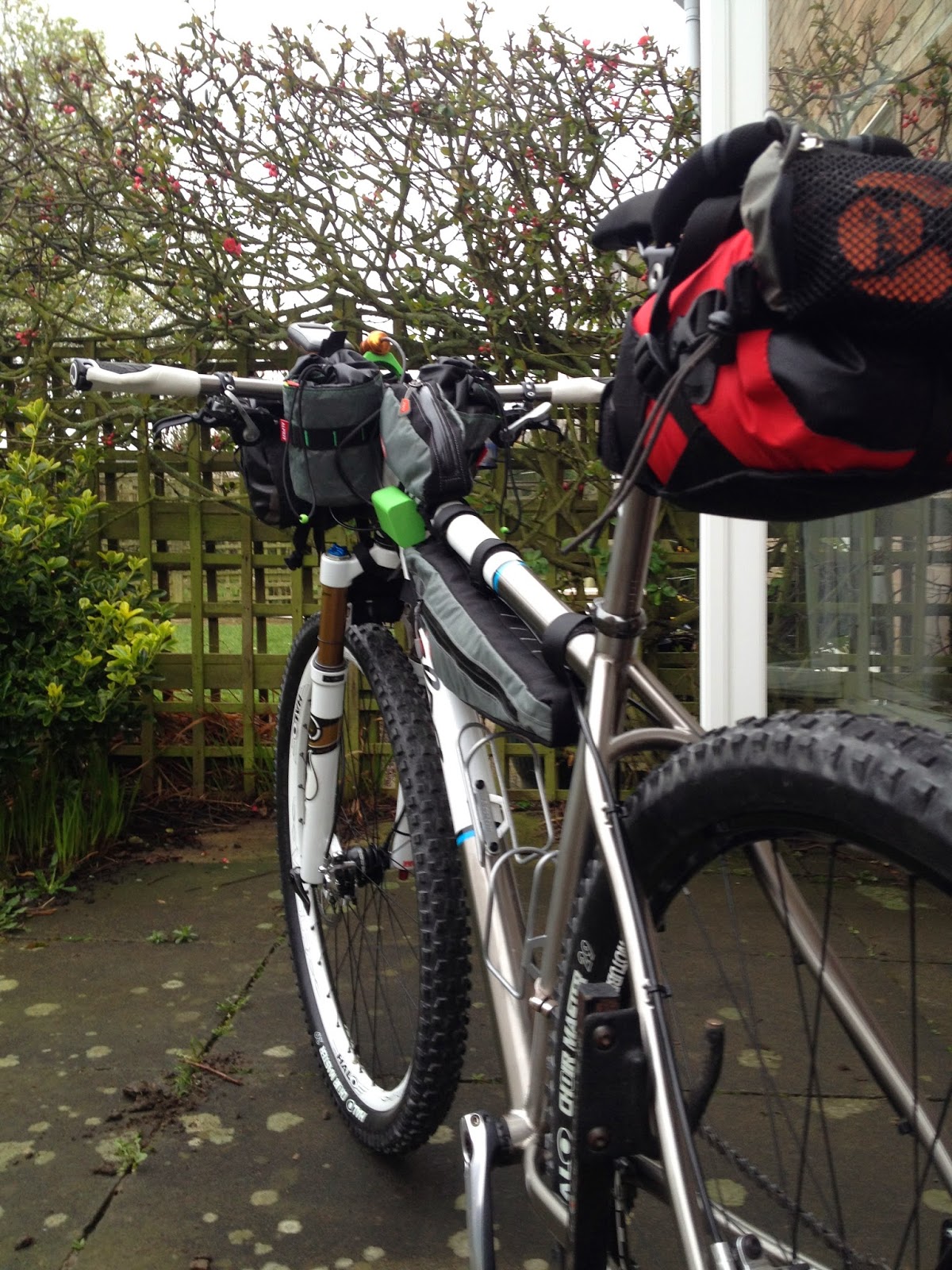 Israel is now only 2 weeks away and for once I feel ready.

Winter traditionally for most is a time to take stock and put in the groundwork for forthcoming plans of adventure.  Whether the groundwork involves developing fitness or a lighter bikepacking rig someone passionate about cycling never really sees any real downtime .. we eat and sleep these adventures from inception to final blog entry.

The start of my year saw my focus shifted from dreams of 2 wheeled adventures to those on 2 skis with a fresh and exciting challenge on cross country skis planned.  When the final goal of all the training and preperation  evaporated through an event cancellation disappointment was soon overcome by a refocus on the next upcoming challenge.

I had always planned that 2014 was going to be a year I didn't pack a bike and travel to ride, after all the UK has so much to offer a rider of any kind of bike.  With little notice an event that I guess had always been at the back of my mind became very much 'going to happen' and before I knew it flights were booked and within a day of deciding I was going to race across Israel !!

Israel even for those challenged by geography is not in the UK so travel was going to happen, but then it always does .. best laid plans and all that.

In 2014 the first Holyland Bikepacking Challenge (http://holylandmtbchallenge.com) takes place.   Starting in the very north of Israel and finishing in the south ... the route traverses a variety of terrain from the green north to the desert in the south all the while immersed in an exciting mix of modern and  historical settings.

Unknown to myself at the time Israel has an ever increasing population of bikepackers. The entry list is brimming with Israeli riders some with some impressive previous event finishes as well as a handful of Internationals .. a great mix which should provide some entertaining riding companions.

As a first point of preparation I joined the Bikepacking Israel Facebook group and began to go through previous posts and photos ... 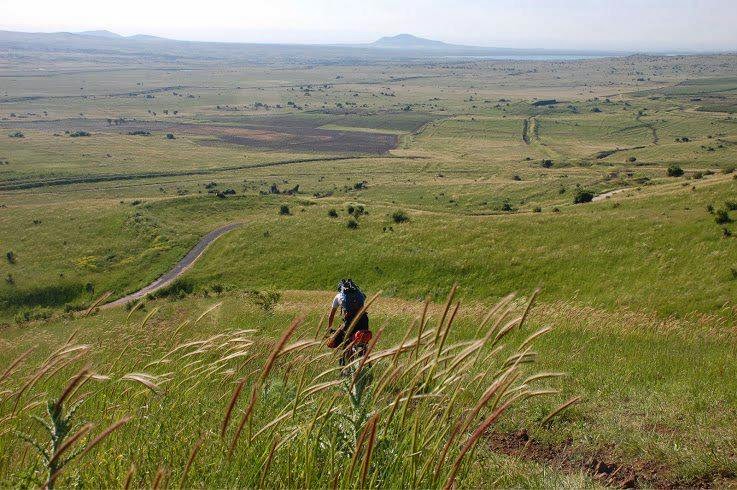 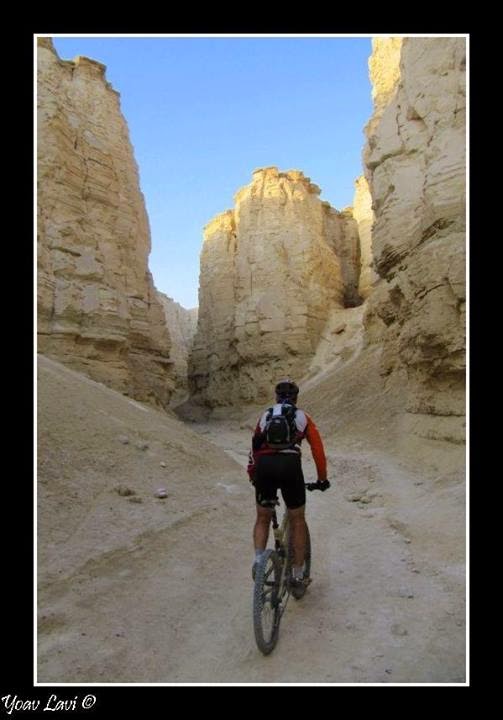 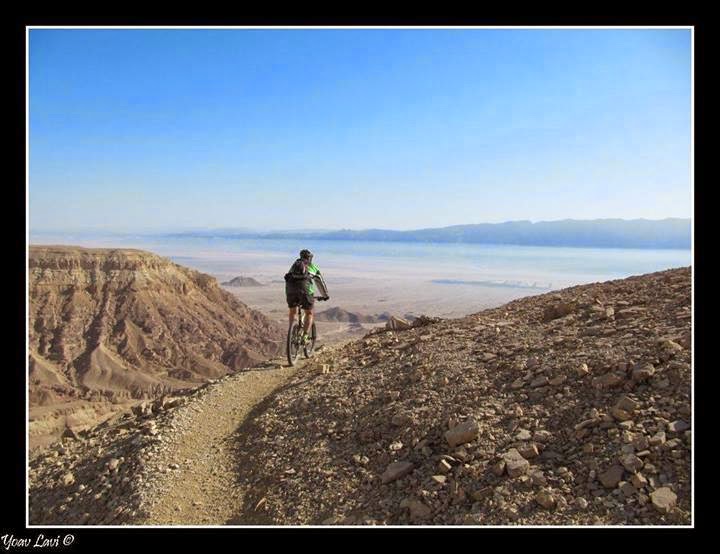 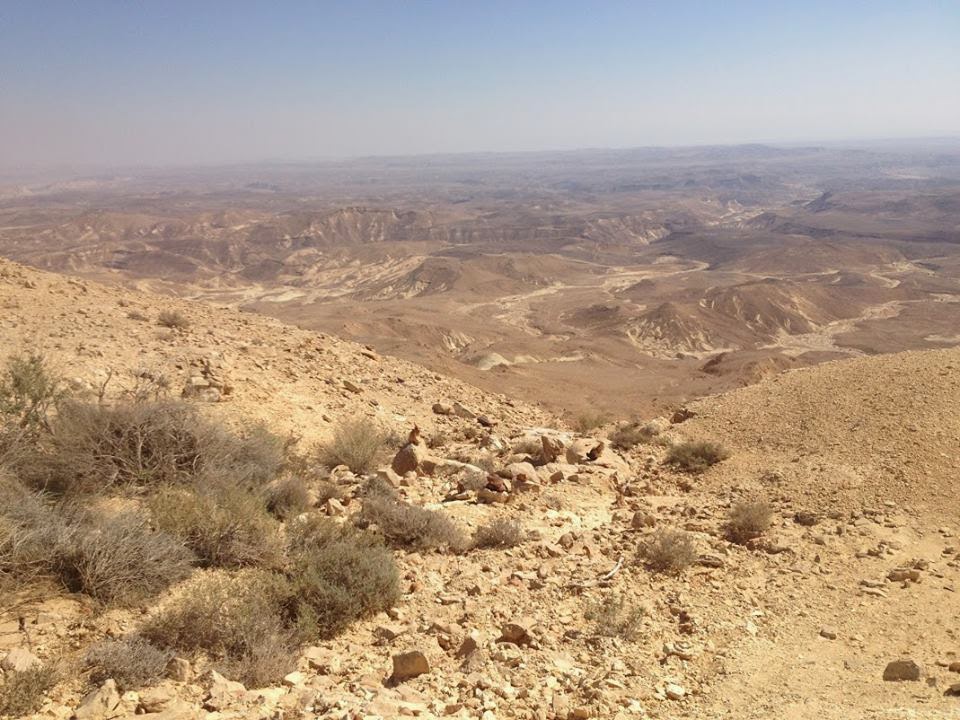 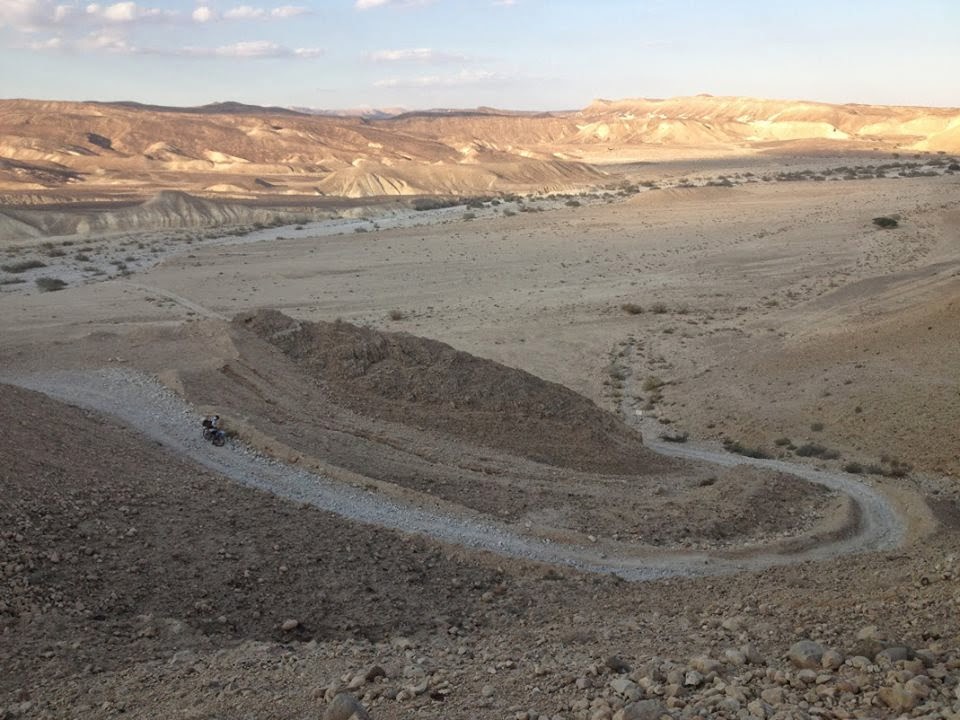 The photos indicated that ahead of me was quite an adventure.

So preparation has started and as usual the set up used for my last bikepacking trip is not good enough so plenty of refinement has started.

The starting point is the 2014 Salsa El Mariachi Ti XTR .. I don't think I could get a better bike ... the perfect balance of comfort and speed.  Add to this already great start some made in the UK Alpkit (Alpkit.com) bike packing luggage the package is starting to look pretty good.  I am opting for 'less is best' with this set up so smaller bags and less gear. 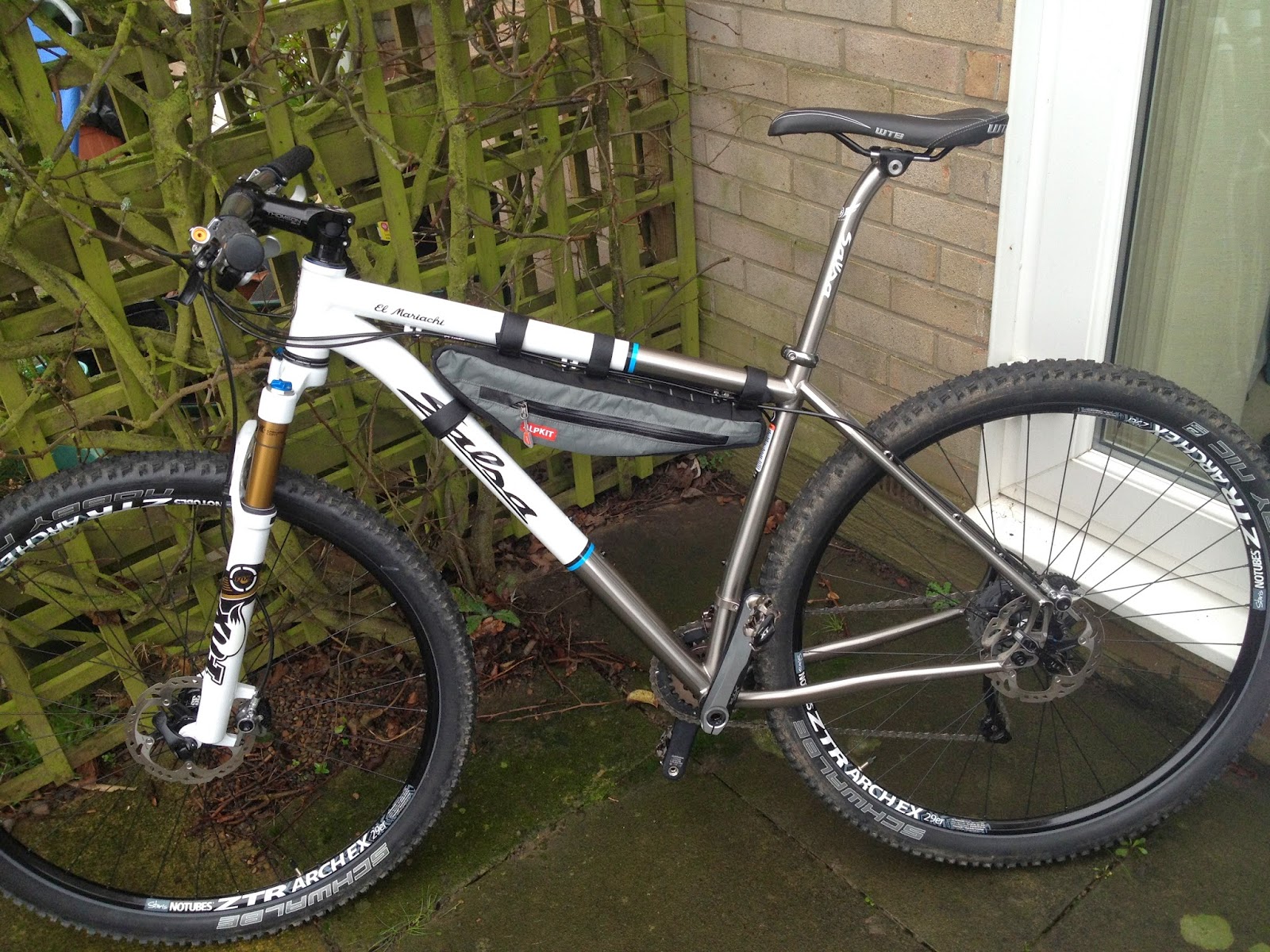 Bike shown without a few bags .. I am taking more than my toothbrush ;) 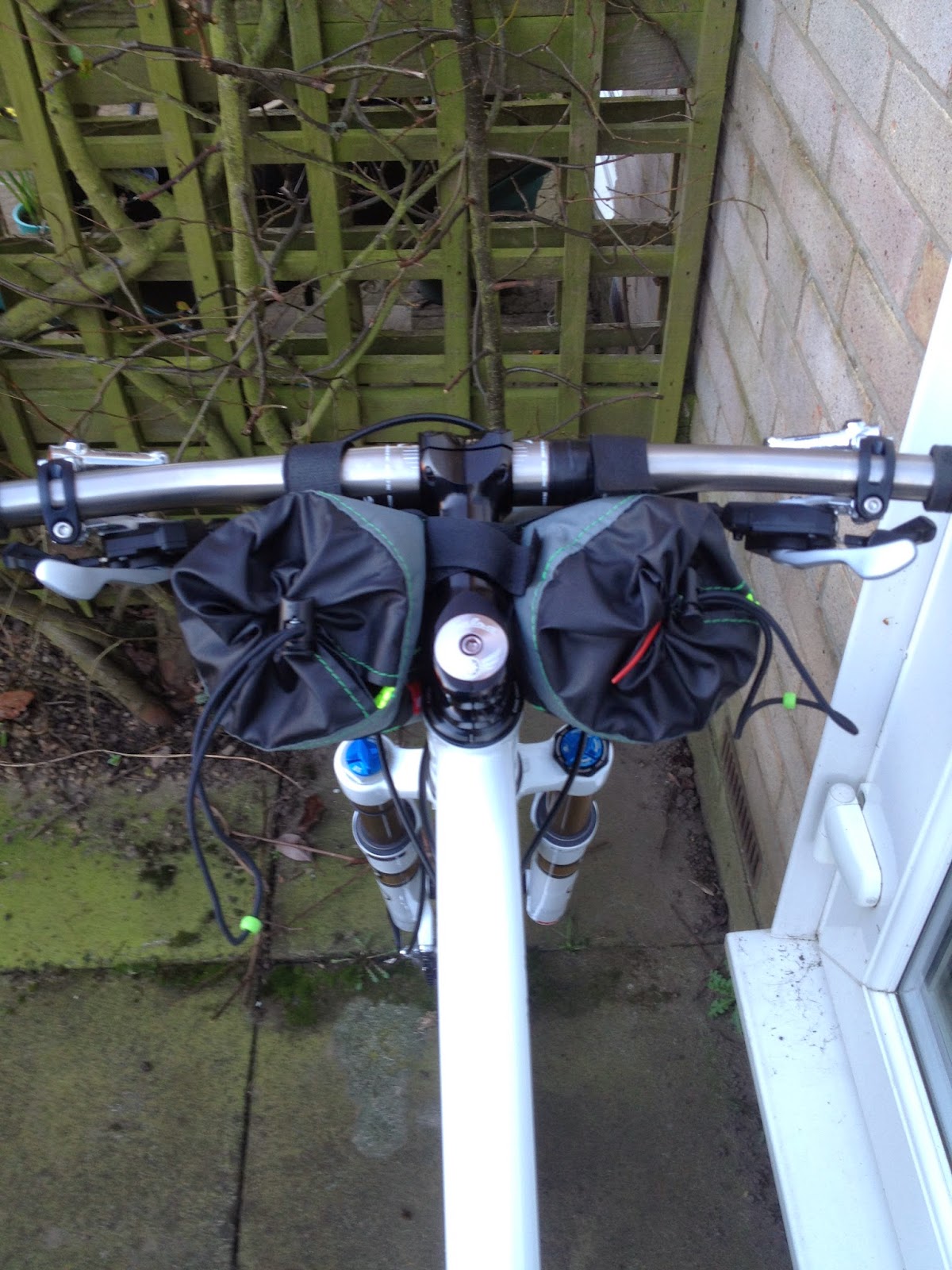 A pair of Alpkit stem cells will house my stove and some food up front for ease of access. 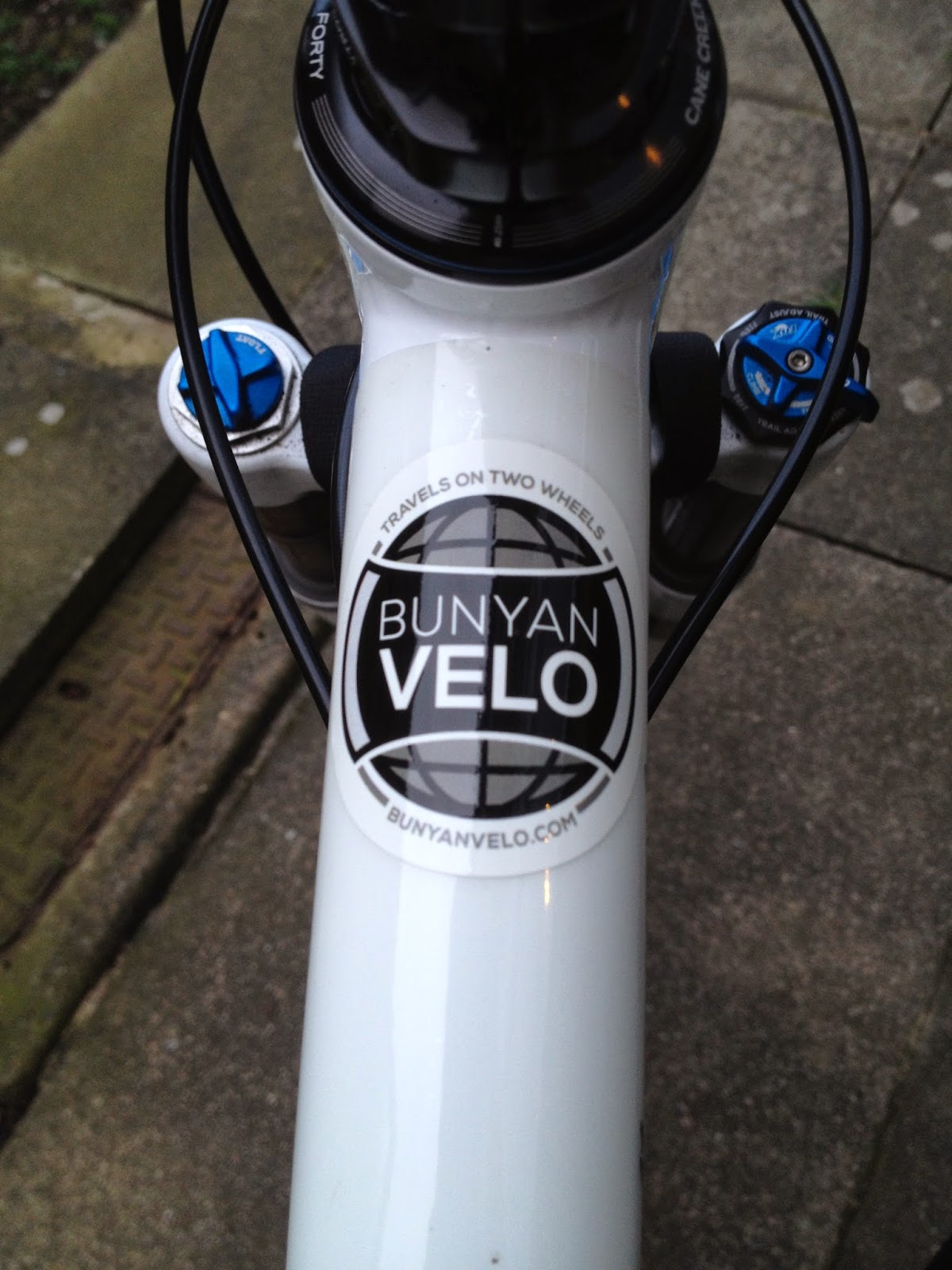 For inspiration a Bunyan Velo (Bunyanvelo.com) decal is in clear site at all times :)

At the moment I still have another 4 weeks so the plan is to ride a big mountain bike loop to check bike position is good then the following week fully loaded riding test to make sure everything is where it is best placed and there are no annoying rattles :)

Next blog will hopefully be the fully loaded bike and kit details :)

Israel images courtesy of Yoav Lavi and the Bikepacking Israel Facebook Group
Posted by paul.e at 21:49 No comments: